Director
Early Childhood Music Director, Warren Henry, is Associate Dean of Academic Affairs in the College of Music at the University of North Texas. He previously served as Chair of the Division of Music Education at UNT. He received a B.M. and M.M. degree in Music Education from the Crane School of Music and his Ph.D. in Music Education from Michigan State University.
Assistant Director
Meghan Miller holds a Bachelor’s of Music in Music Education from the University of North Texas. She taught general music and choir at E. P. Rayzor Elementary in Denton for three years, during which time she had the privilege of teaching over 1,000 students. Meghan has continued to teach or accompany part-time while staying home with her three children. Some of her part-time work has included teaching high school choir at Denton Calvary Academy, as well as assisting and accompanying the choirs at Denton Calvary Academy and teaching private piano and voice lessons. She loves the way music brings joy to students and strives to make each musical experience meaningful. Students and parents can look forward to exploring music through singing, movement, games and more in an exciting learning environment.
Philosophy
Music is learned in much the same way that language is learned.  Just as children learn to speak from being in a rich, language-filled environment, children become musical through exposure to a rich, music-filled environment.  Like language acquisition, musical development occurs sequentially, moving through stages of listening, vocal exploration, and music babble, which eventually lead to beat competency and accurate singing.
The UNT Early Childhood Music Program is designed to create a rich musical environment for children.  Some children will be active participants, while others will prefer to watch and absorb.  Although classes will differ according to the age levels and readiness of the children, all classes will include songs, chants, movement, and instrument exploration.  Many of the songs and chants performed in class will be without words, because we want the children to focus on the musical content rather than their natural tendency to focus on words.
FAQ
1.  Why do you do so many songs and chants without words?
The goal of the early Childhood Music Program is to maximize children’s musical learning opportunities.  Some theories suggest that when songs and chants are presented with words, children tend to focus on the text rather than the musical content.  Therefore, we perform many songs and chants without words so that the children can focus on tonal and rhythmic characteristics.
2.  Why don’t you use more instruments?
At the early stage of a child’s musical development, fine motor coordination to play many of the instruments is not yet developed.  Also, children seem to respond to the elements of music more quickly when they are presented by the human voice.  Human interaction is critically important to child development.  Throughout the semester, however, we include some playing of instruments for the children to explore different sounds.
3.  I am worried that my child is not participating in class.  What should I do?
Not to worry!  Your child will participate when he or she is ready.  In the mean time, know that there are some children who learn best from watching and silently absorbing what we do in class.  Observing rather than participating is perfectly normal and is not indicative of a child’s interest or talent.  We do not judge children on the basis of how they perform for us in class. There will be some children who wander around during class.  You can gently encourage your child to join the group, but please do not force them.  Wandering is fine!  The teacher will not intervene unless the child is interfering with learning.
4.  Why won’t my child sing with me?
Until children are developmentally ready, they will not be able to coordinate their singing with that of an adult.  We sing for the children and then hope that they will experiment with what they have heard at their own pace and in their own time.  As the children mature musically, they will perform with us when they are ready.
5.  What should I do during class and at home?
Parents should participate in class.  If the teacher moves to a song in a certain way, imitate the movement.  As you get to know some of the songs, sing along!  Please do not give the children food, drink, or toys during class.  This tends to distract the other children.  Anything of this nature should be kept for before or after class.
A CD of the semester’s repertoire will be provided.  Your child will love the CD and will learn more as a result.  If you can sing the songs or perform the chants that we do during class, please do so during the week.  Create as rich a musical environment as possible for your child at home. 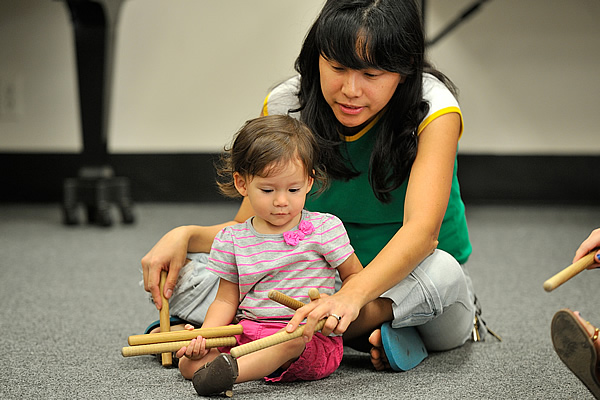